bulb had such success with last summer's cell phone photo competition
that we have decided to once again offer you the opportunity to
interpret, create & have your photographs seen!

bulb presents: the winter 2011 photo challenge ... dark secret!
the topic was chosen by the students in the art institute's photo design class.
now it is up to you to get creative with concepts and all that great photo tech stuff!
remember, there is no wrong answer to a question like this!
your interpretation of ... dark secret is just that, YOUR interpretation.

the challenge is open to image makers of all levels, backgrounds & interests.
photographs from all types of cameras will be considered for judging...
cell phones, video stills, traditional film & digital camera, alternative processes, pinhole and toy cameras!

... dark secret submissions will be due Friday, March 18, 2011
resizing and renaming files in image editing software will help me stay organized & get the contest posted faster. you can help speed the process along by sticking to the following file specifications:
72 dpi jpegs, about 700k labeled with your first and last name (sarahbaron1.jpg or sarahbaron2.jpg)


you can email your image submissions directly to me at sarahcbaron@gmail.com

once all of the images have been submitted, i will curate the online show.
then our special guest juror will decide the top three images.
the three winners will each receive a feature on the blog to post their own work!

... dark secret will be judged by mr. sean carroll! we are pretty lucky to have him participating.


sean carroll is an artist and arts administrator based in brooklyn, ny, and a current artist-in-residence at the elizabeth foundation for the arts in new york city. he manages the artist residencies at lower manhattan cultural council (lmcc), overseeing two programs that transform vacant space in nyc's financial district into studio and rehearsal space for visual and performing artists and writers.  he moonlights as a bike tour guide, and in his spare time enjoys taking pictures and train trips, reading maps, and riding his bicycle in and around new york city.  his works have been included in exhibitions in new york, washington, dc, northern virginia, and north carolina.  sean went to college at american university in washington, dc and received a mfa in photography from pratt institute in brooklyn.

so there you go bulbers!!
get out there and take some photographs! 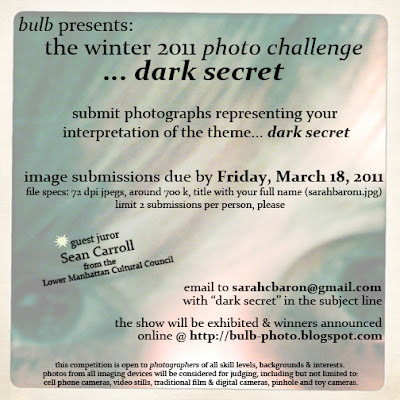 this blog is dedicated to exhibiting images from students, ideas in progress and various tidbits of photographic & art related information.
bulb is happy to sponsor photographic competitions to challenge the creative mind!
to view my completed personal work, please visit my fine art photography website listed below...